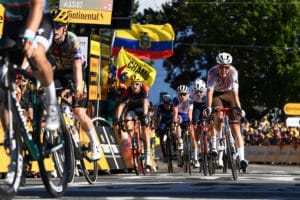 « It’s with mixed feelings. I am very happy with this top-10 after more than three years in search of my form. But I made a mistake by starting my sprint from so far out. I know I can be among the best on finishes like this. So, it’s a shame to come so close to a better result. This first top-10 will be good for the AG2R CITROËN TEAM after a start to the Tour marked by bad luck, in particular with the crash and the mechanical problem that Ben O’Connor had, as well as Geoffrey Bouchard having to leave the race this morning since he was positive for Covid-19.»

After eight stages, Aurélien Paret-Peintre is fifteenth in the general classification, 3’08 behind leader Tadej Pogacar.

As part of the Journée Vivons Vélo supported by AG2R La Mondiale, the 1304 km covered by the seven riders of the AG2R CITROËN TEAM today will be converted into donations by AG2R La Mondiale for the benefit of the Institut Pasteur in order to finance research to fight degenerative diseases. They also wore the Vivons Vélo jersey when signing in this morning. This year, the objective is to cover 20,000 km thanks to all the Vivons Vélo gatherings throughout France.
The Journée Vivons Vélo took place during the stage from Dole because it is the birthplace of Louis Pasteur.