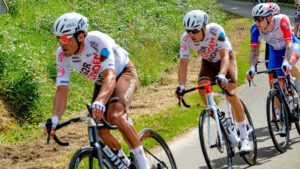 Benoit Cosnefroy : « I tried to race as precisely as possible »

« This year I’ve definitely had trouble unblocking the counter for a win. I had been marked as a favorite. So I had to race based on that. I tried to make myself forget a little while riding behind. The last time a stage was contested on this course, a peloton of forty riders arrived in a sprint. I ran a little out of time but it was also a good way to manage that and to race as precisely as possible even if I had to produce two big efforts on the last lap.
We had a solid race, with a great team. I took second. The balance sheet is pretty good. »Benoit

Fifth in the nineteenth stage of the Giro, Andrea Vendrame scored his fifth top-10 since leaving Budapest.

Andrea Vendrame, present in the successful breakaway, finished fifth in the nineteenth stage of the Giro d’Italia. “I did my best to win. I knew the last corner was close to the line. I went on the outside. Mauro Schmid (Quick Step Alpha Vinyl) braked hard. I was a little scared and I had to go straight. It’s a shame and it will serve as a lesson to me. Still, it’s a good day. I was in the breakaway, I managed to come back after being dropped on the climb,” Andrea Vendrame said.