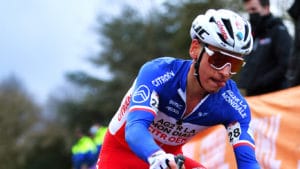 « My return to cyclocross racing last week was encouraging since I took 20th place at the World Cup in Hulst (Netherlands). I had a full race. This year I am going to be at the start of the French Championships in Liévin with the same desire as I have had in previous years, which is to compete for the title. My preparation was a little delayed by Covid-19, and I have no reference to the best French racers this season, so we will see how I compare to the competition. I really want to be part of the selection for the World Championships at the end of January to finish my cyclocross campaign. I like the course; it is physically difficult and really interesting. And it’s always a source of pride to wear the French national jersey. I am passionate about cyclocross and I like to have fun on the bike. But the objective remains twofold, that of regaining my explosiveness and my fitness for the road season thereafter.»Clément

After the Liévin French Championships, Clément Venturini will be with the AG2R CITROËN TEAM in Dénia (Spain) for a training camp on the road from January 10 to 14.
He will then continue his cyclocross program with:
– The World Cup in Flamanville (France, January 16)
– Le FlandrienCross in Hamme (Belgium, January 22)
– The World Cup in Hoogerheide (Netherlands, January 23)
– The World Championships in Fayetteville (United States, January 30) (Subject to selection by the French Cycling Federation)

In addition, he is expected to resume his road season at the Ardèche Classic on February 26.