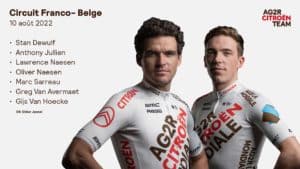 « After two weeks of training at altitude in Livigno (Italy) in July, my return to racing at the Tour de Wallonie (July 23-27) went well. The race was difficult and the work I did for Greg Van Avermaet (5th in the general classification) made it possible to find my rhythm quickly.
I feel that the form is there ahead of the Franco-Belgian Circuit. It’s a race that I know very well since it will be my ninth participation.
We will have two cards to play with the AG2R CITROËN TEAM. On the one hand, we can rely on the sprint with Marc Sarreau and Lawrence Naesen and on the other, we can make it a very aggressive race with Greg Van Avermaet, Oliver Naesen and Stan Dewulf.
Since the route is difficult, along with the heat and perhaps the wind, there will be enough to do at the race. »Gijs

Greg Van Avermaet will compete in the Franco-Belge Circuit for the third time, thirteen years after his last participation in 2009.

Dorian Godon selected for the European Championships in Munich