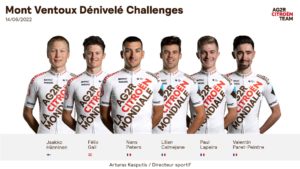 « After the Giro d’Italia, I took a few days off and then went back to training. I think I have recovered well; the form is good. However, the Giro d’Italia being my first grand tour, I don’t know how my legs will react in my first race back, especially in a race as difficult as the Mont Ventoux Dénivelé Challenges.
It is a legendary mountain that I have never had the chance to climb. I can’t wait to be there and see what we can do with the AG2R CITROËN TEAM.
I will then continue with the Route d’Occitanie then the Austrian Championships to close this first part of the season. »Felix

Four of the six riders from the AG2R CITROËN TEAM taking part in the Mont Ventoux Dénivelé Challenges took part in the Giro d’Italia which ended on May 29 in Verona:
Lilian Calmejane, Félix Gall, Jaakko Hänninen, and Nans Peters.

Recon of the Tour de France for Bouchard, O’Connor and Paret-Peintre

On June 13 and 14, Geoffrey Bouchard, Ben O’Connor and Aurélien Paret-Peintre will ride the final of the eleventh stage of the Tour de France between Albertville and the Col du Granon (13/07) as well as that of the twelfth stage between Briançon and Alpe d’Huez (14/07).