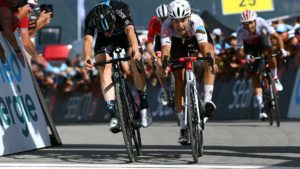 « I saw straight away that I was passed on the finish line by Nico Denz during this sprint for victory. Unfortunately, I wasn’t missing much to win, it’s a shame because I had a good sprint.
I just followed the wheels during this last climb with my current physical condition, it was the best option for me to play for the win.
I still lack a bit of rhythm, I only returned to competition on May 31 at the Mercan’Tour Classic Alpes-Maritimes, after my crash during the Tour of the Alps. »Clément

Bob Jungels took fifteenth place in this sixth stage of the Tour de Suisse. He arrived with the group of favorites.
He moved up to eleventh place in the general classification, 1 minute 36 behind Jakob Fuglsang, leader of the race.

Andrea Vendrame finishes tenth in the second stage of La Route d’Occitanie – La Dépêche du Midi. He is sitting in sixth place in the general classification ahead of the last two stages this weekend.
This second stage was shortened to 35 kilometers. The route was amputated to remove all of the section through the Tarn department by decision of the prefect, after the department was placed under a red “heat wave” warning.