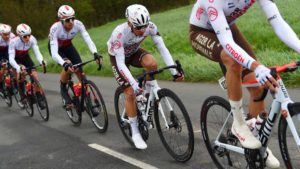 Clément Venturini : « Happy to be back at the front »

« We were keen to catch up after last weekend where we failed to get on the podium. We took the race on our own with great work from Anthony Jullien throughout the day. In the end, it was off the leash and I made some unnecessary efforts. That’s the only small regret I can have. It’s still a good result, I’m happy to be back at the front.
The sensations quickly returned after my injury but that’s not a matter of chance; I really put in the hard work.
Tomorrow is another day with the Boucles de l’Aulne, a race that also suits me well. I have already finished on the podium there (third in 2016) so I hope to play a leading role again. »Clement

For his return to racing, Greg Van Avermaet placed fifth at the Tour du Finistère. He had not started a race since Paris-Roubaix on April 17.
After the Tour du Finistère, Clément Venturini is in third place in the general classification of the Coupe de France.
“The classification of the Coupe de France can become a common thread for the second half of the season if I have good results in the next rounds, starting with the Boucles de l’Aulne tomorrow,” said Clément Venturini.
The AG2R CITROËN TEAM leads the team classification.

Mikael Chérel took 28th place in the fourteenth stage of the Giro d’Italia. He gained five places in the general classification (24th).
“We tried to get in the break several times, Nans (Peters) joined a good breakaway but the contenders for the general classification decided to go to war today. We tried and we will try again tomorrow with the same intention,” said Didier Jannel, directeur sportif of the AG2R CITROËN TEAM.